Radical Abicus
Antone Könst: “Second Nature”
Radical Abacus Santa Fe
March 28 2017 – April 23 2017
A wisp of coated wire is impacted in the chalky plaster surface of “NM Slab 8”
(2017). Some of its green insulation has been rasped away, revealing copper
underneath. This inconspicuous fragment conducts oscillating affinities through
“Second Nature”: synthetic resins, coiled fronds, the heads of coins, faces of
the moon, glyph-like reductions.
With raw mimetic artificiality, the work of Antone Könst hollows the material
and practical components of the built environment. The result of years of effort,
“Second Nature” is comprised of: four wood moons with round faces painted
black; two foam trees the size of shrubs; clusters of patinated copper ferns that
stem from the concrete floor; a screen with three moons before a glowing
space of uncertain dimensions; one oil painting; and cement panels affixed
with fragments of cast plastic moons.
Könst presses conventions like: life drawing (which he teaches at the college
level), landscaping (his father is a landscaper), illustration (he has designed
album covers), computer modeling (he is a contributing member of an art
exhibition space in virtual reality), and decoration (brought up in New
England, he cites imagery and traditions now absorbed into regional kitsch).
Matisse’s late experiments with paper cut-outs and religious architecture are
particularly relevant. He wanted to teach the future to scissor directly into
color, to communicate immediate insight into natural form. Könst’s trees are
planks of green insulation reduced to rings then stacked in the stepped profiles
of ornament and memory. Resembling topiaries and machined modernist
sculpture, they possess the scale of things seen from far away. Their empty and
unseen cores, signaled by oscillating tones (one sine wave describes a sphere,
the other a cone), mold and recapitulate the shape of visible edges.
The four individual moons are round wood screens carved with a reciprocating
saw. Branching within each frame are the outlines of calligraphic flourishes and
ideographic motifs. One material imperative of the format is that the contours
make a single unbroken surface as they abut each other and the round frame.
Könst here translates the conventions of mark-making by avoiding the addition
of marks: the noncomposite evacuation of a physical solid doubles as the
assembly of facial features by the cusps and loops of decorative handwriting.
The door to the confessional at Vence, carved in a loose grid of diamonds and
circles and illuminated from behind by Matisse’s stained glass, suggested to
Könst the format and installation of the panel with three moons. Propped
across the threshold of a luminous space, the tide of violet light spilling over it,
the blue panel appears yellow (like Matisse’s door, the artist recalls). As the
black moons simulate the conventions of drawing, the blue panel acts like a
painting by indicating coloristic devices unavailable to line alone.
“René” is the only painted canvas in “Second Nature”. In the background from
left and right, palm trees flex toward the center and the blue sky above. They
meet and cross in receding arches of forest canopy that enclose a tunnel-like
passage. This hollow cylinder registers a correspondence with the piece of
green insulated wire affixed to “NM Slab 8”. But whether the painted
depiction of foliage is more natural – basic and non-derived – than the
readymade’s polymer coating, cannot be decided from their reciprocal
qualification of formats.
In the foreground, a giraffe stands in profile, mid-stride yet oddly still, its legs
animated in the lifelike pose of taxidermy. A pattern of overlaid lozenge
brushstrokes and round dabs spots its coat. A terrified monkey clings to its
neck. The smaller creature must have mistaken the giraffe for a tree. The
monkey raises its tail straight up, eye level with the giraffe, desperately
probing for branches to enwrap (there are none) or for ways to draw the
giraffe’s attention (the larger creature lifts its chin, narrows its gaze, and curls
its lip).
The giraffe’s arrogance also reads as pique and frustration. Both it and the
monkey are confined upon a sheer foreground plane bounded by the four
edges of the canvas. They lack spatial recourse to the forest behind them and
to anything outside of the picture. (They’re stuck with each other.) Above the
giraffe’s head, the upright gray tail bends toward the top right corner, but
stops short, as if encountering an exitless formal boundary. Minus this curl, an
additional width would open for the giraffe to shift to the right before carrying
the tip of monkey’s tail over the painting’s edge. Whether or not it intended to
make a formal intervention, the monkey (who hasn’t stopped screaming)
effectively halts the charging giraffe by indenting an internal frame.
“René”, like the rest of “Second Nature”, remains an enigma of similarity and
exchange. We cannot determine who is surprised, and who has the angle; who
is in charge, and who is taken for a ride. It might say: second nature is what
we inadvertently grasp; also what swings from our necks unbeknownst to us.
(John McKissick) 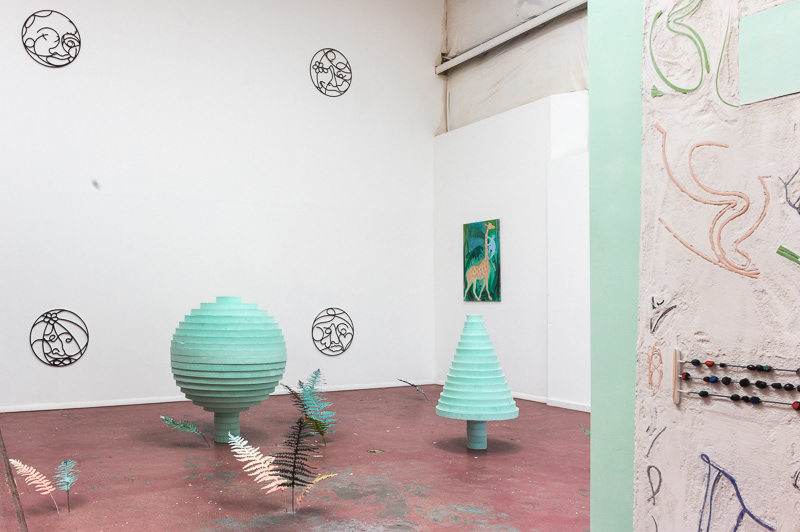 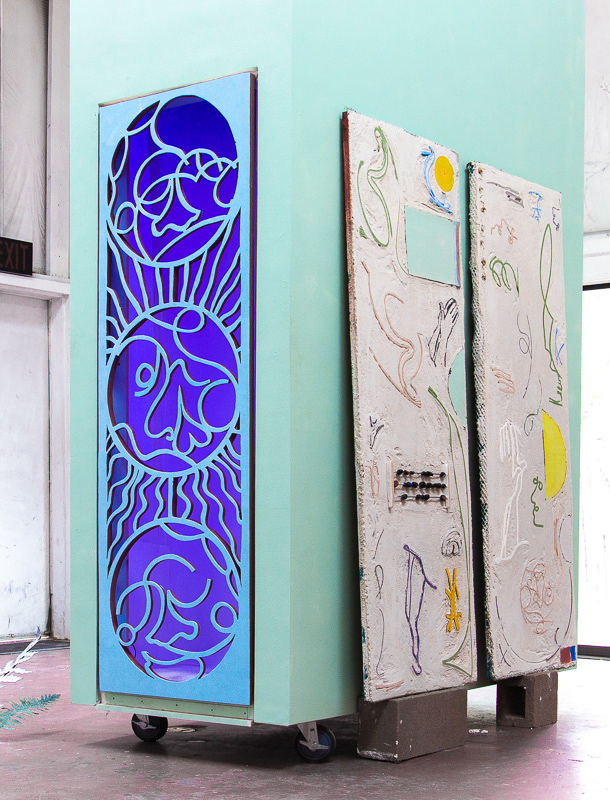 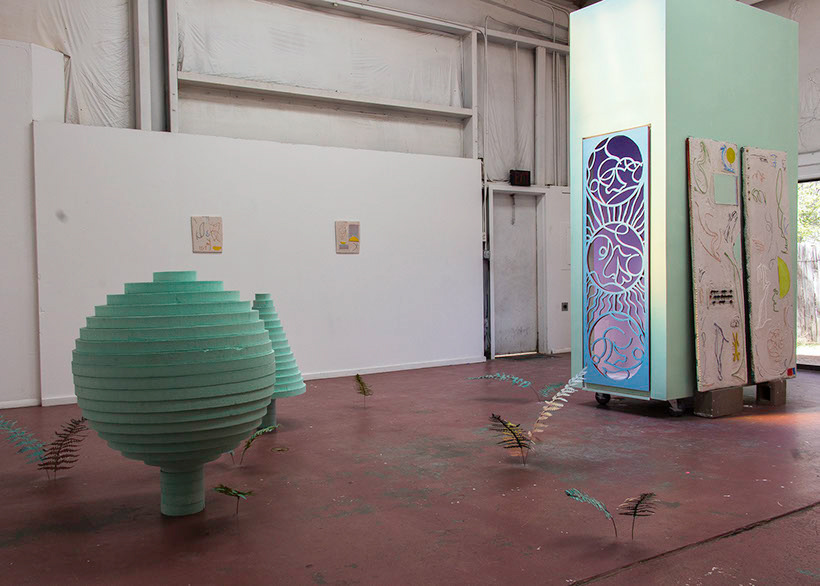 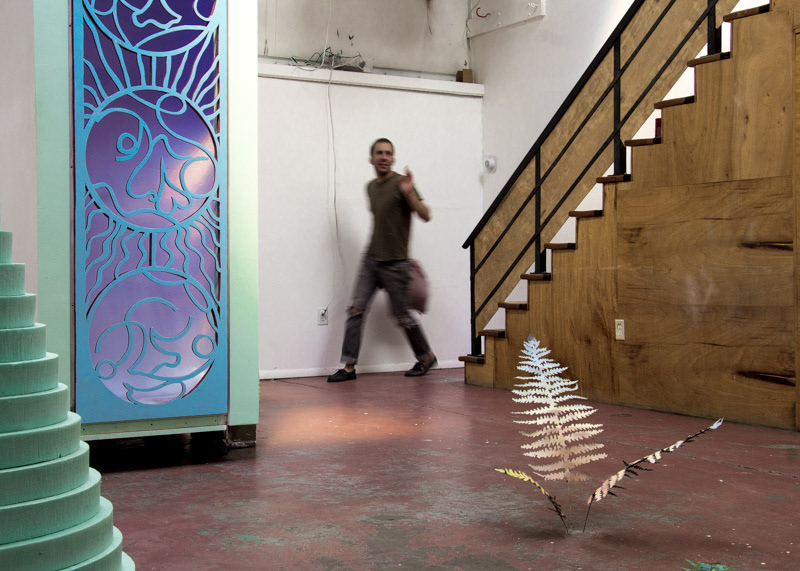 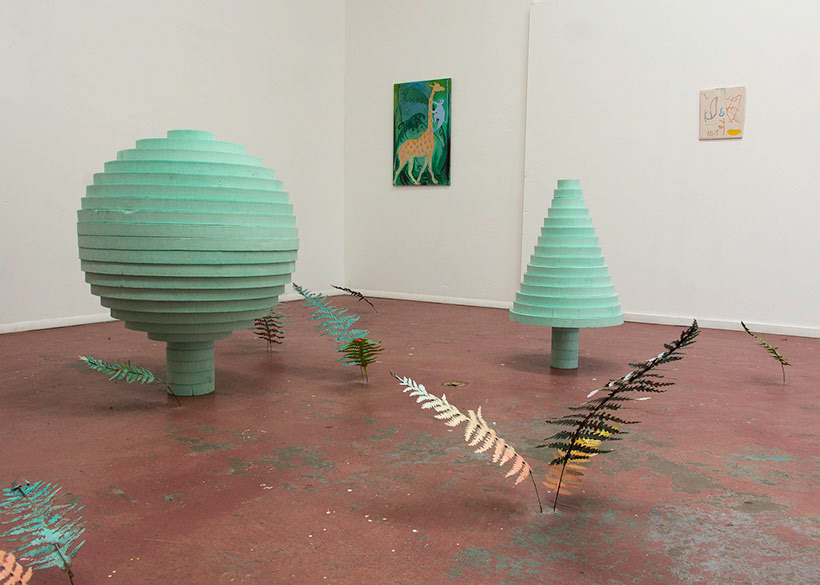 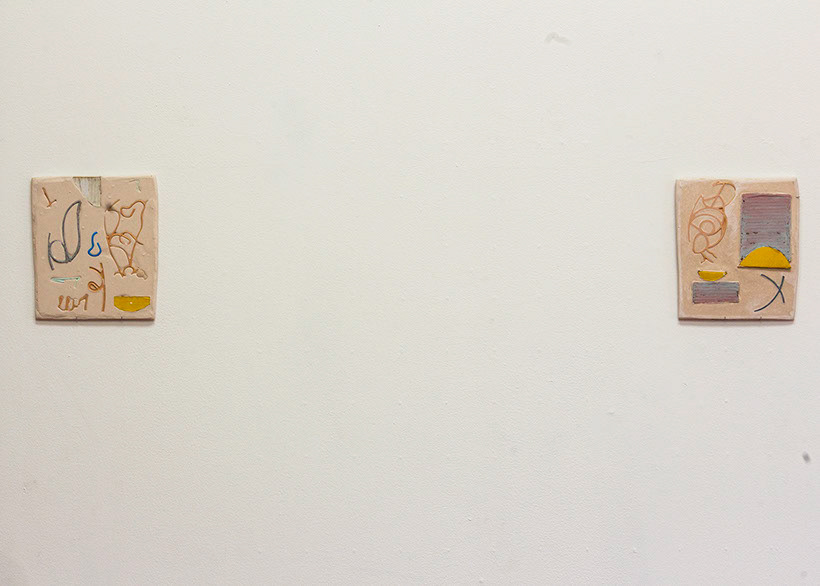